The Practice of Love 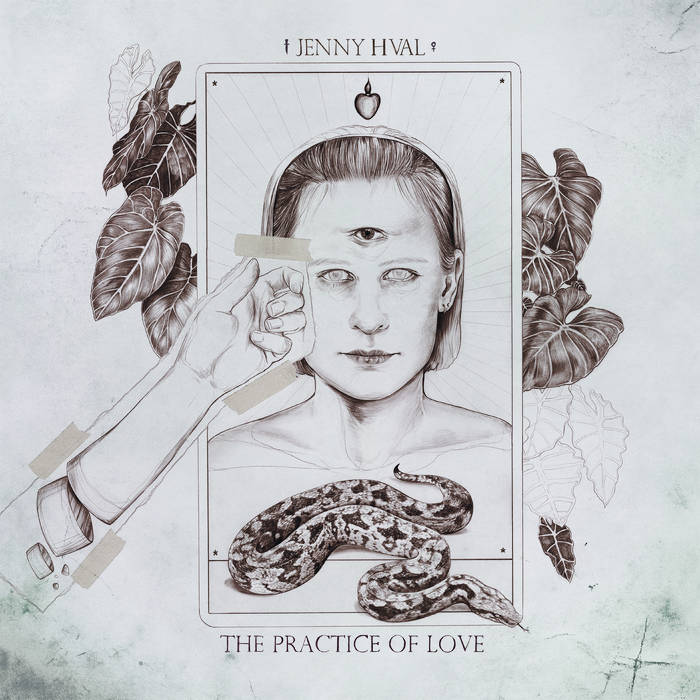 Benny Lichtner This entire album is wonderful and unusual and groovy and poignant. Very rare to have all of those in one IMO. The songs are earnestly sung. Favorite track: Ordinary (feat. Vivian Wang and Félicia Atkinson).

Steven Moses A brief and sardonic introspective of love and its ridiculousness. Jenny Hval injects a surprising amount of humor, particularly in the title track, but the spellbinding electronics are beautiful and lush. Favorite track: The Practice of Love (feat. Laura Jean and Vivian Wang).
more...

At first listen, The Practice of Love, Jenny Hval’s seventh full-length album, unspools with an almost deceptive ease. Across eight tracks, filled with arpeggiated synth washes and the kind of lilting beats that might have drifted, loose and unmoored, from some forgotten mid-’90s trance single, The Practice of Love feels, first and foremost, compellingly humane. Given the horror and viscera of her previous album, 2016’s Blood Bitch, The Practice of Love is almost subversive in its gentleness—a deep dive into what it means to grow older, to question one’s relationship to the earth and one’s self, and to hold a magnifying glass over the notion of what intimacy can mean. As Hval describes it, the album charts its own particular geography, a landscape in which multiple voices engage and disperse, and the question of connectedness—or lack thereof—hangs suspended in the architecture of every song. It is an album about “seeing things from above—almost like looking straight down into the ground, all of these vibrant forest landscapes, the type of nature where you might find a porn magazine at a certain place in the woods and everyone would know where it was, but even that would just become rotting paper, eventually melting into the ground.”

Prompted by an urge to find a different kind of language to express what she was feeling, the songs on Love unfurl like an interior dialogue involving several voices. Friends and collaborators Vivian Wang, Laura Jean Englert, and Felicia Atkinson surface on various tracks, via contributed vocals or through bits of recorded conversation, which further posits the record itself as a kind of ongoing discourse. “The last thing I wrote, which was my new book (forthcoming), had quite an angry voice,” says Hval, “The voice of an angry teenager, furious at the hierarchies. Perhaps this album rediscovers that same voice 20 years later. Not so angry anymore, but still feeling apart from the mainstream, trying to find their place and their community. With that voice, I wanted to push my writing practice further, writing something that was multilayered, a community of voices, stories about both myself and others simultaneously, or about someone’s place in the world and within art history at the same time. I wanted to develop this new multi-tracked writing voice and take it to a positive, beautiful pop song place... A place which also sounds like a huge pile of earth that I’m about to bury my coffin in.”

Opening track “Lions” sets the tone for the record, both thematically and aesthetically, offering both a directive and a question: “Look at these trees / Look at this grass / Look at those clouds / Look at them now / Study this and ask yourself: Where is God?” The idea of placing ourselves in context to the earth and to others bubbles up throughout the record. On “Accident” two friends video chat on the topic of childlessness, considering their own ambivalence about motherhood and the curiosity of having been born at all. “She is an accident,” Hval sings, “She is made for other things / Born for cubist yearnings / Born to Write. Born to Burn / She is an accident / Flesh in dissent.” What does it mean to be in the world? What does it mean to participate in the culture of what it means to be human? To parent (or not)? To live and die? To practice love and care? What must we do to feel validated as living beings? Such questions are baked into the DNA of Love, wrapped up in layers of gauzy synthesizers and syncopated beats. Even when circling issues of mortality, there is a kind of humane delight at play. “Put two fingers in the earth,” Hval intones on “Ashes to Ashes”— “I am digging my own grave / in the honeypot / ashes to ashes / dust to dust.”

Balanced against these ruminations on love, care and being, Hval employs sounds that are both sentimental and more than a little nostalgic. “I kept coming back to trashy, mainstream trance music from the ’90s,” she says, “It’s a sound that was kind of hiding in the back of my mind for a long time. I don’t mean trashy in a bad sense, but in a beautiful one. The synth sounds are the things I imagined being played at the raves I was too young and too scared to attend, they were the sounds I associated with the people who were always driving around the two streets in the town where I grew up, the guys with the big stereo in the car that was always just pumping away. I liked the idea of playing with trance music in the true transcendental sense, those washy synths have lightness and clarity to them. I think I’m always looking for what sounds can bring me to write, and these synths made me write very open, honest lyrics.”

Though The Practice of Love was, in some sense, inspired by Valie Export’s 1985 film of the same name, for Hval the concept of love as a practice—as an ongoing, sustained, multivalent activity—provided a way to broaden and expand her own writing practice. Lyrically, the 8 tracks present here, particularly the title track, hew more closely to poetic forms than anything Hval has made before. (As evidenced by the record’s liner notes, which assume the form of a poetry chapbook.) Rather than shrink from the subject or try to overly obfuscate in some way, Love considers the notion of intimacy from all sides, whether it be positing the notion of art in conversation with other artists (“Six Red Cannas”) or playing with clichés around what it means to be a woman who makes art (“High Alice”), Hval’s songs attempt to make sense of what love and care actually mean—love as a practice, a vocation that one must continually work at.

“This sounds like something that should be stitched on a pillow, but intimacy really is a lifelong journey,” she explains, “And I am someone who is interested in what ideas or practices of love and intimacy can be. These practices have for me been deeply tied to the practice of otherness, of expressing myself differently from what I’ve seen as the norm. Maybe that's why I've mostly avoided love as a topic of my work. The theme of love in art has been the domain of the mainstream for me. Love is one of those major subjects, like death and the ocean, and I’m a minor character. But in the last few years I have wanted to take a closer look at otherness, this fragile performance, to explore how it expresses love, intimacy, and kindness. I've wanted to explore how otherness deals with the big, broad themes. I've wanted to ask big questions, like: What is our job as a member of the human race? Do we have to accept this job, and if we don’t, does the pressure to be normal ever stop?”

It’s a crazy ambition, perhaps, to think that something as simple as a pop song can manage, over the course of two or three minutes, to chisel away at some extant human truth. Still, it’s hard to listen to the songs on The Practice of Love and not feel as if you are listening in on a private conversation, an examination that is, for lack of a better word, truly intimate. Tucked between the beats and washy synths, the record spills over with slippery truths about what it is to be a human being trying to move through the world and the ways—both expected and unexpected—we relate to each other. “Outside again, the chaos / and I wonder what is lost,” Hval sings on “Ordinary,” the album’s closing track, “We don’t always get to choose / when we are close / and when we are not.”

Bandcamp Daily  your guide to the world of Bandcamp

Featured sounds from Fly Lo and Ahmed Idris, plus Mother Nature hops on to drop off new project